A local hashtag became the top trending topic on Twitter and even received national response on Friday amid other big ticket news items – Russell Westbrook’s extension and the 2016 Olympics Opening Ceremony to name a few.

The hashtag #ShopEdmond was besieged with responses on Twitter Friday after the lifestyle magazine Edmond Active said it had trademarked the phrase. 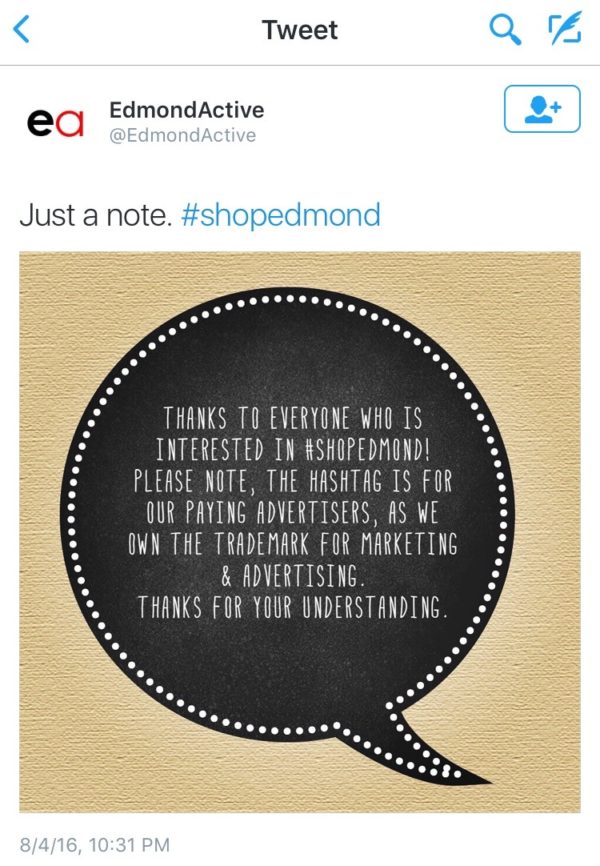 The Twitterverse heartily rejected this assertion, and the hashtag was used by outraged users posting everything from silly pictures to heated screeds about marketing and intellectual property law.

The long and short of the dilemma stemmed from the publisher of the lifestyle magazine Edmond Active, Sherri Hultner, trying to defend a trademarked phrase when used for marketing and advertising purposes. Hultner said the tweet was intended for businesses trying to leverage #ShopEdmond audiences for their own business without advertising with Edmond Active.

However, the tweet requesting people not to use the hashtag was seen as an attempt to keep the public from using the hashtag as well, which is what seemingly fueled the negative conversation.

“It’s not even really a hashtag that the public uses,” Hultner said in a phone interview with The Oklahoman. “It hasn’t been an issue except for three or four people grabbing it for marketing.”

Not only did the original tweet offend, though, but the initial responses between the brand and upset Twitter users – including the blocking of local reporter Brianna Bailey – caused the controversy to continue growing until was a nationally trending topic and garnered a response from the man who created the hashtag, Chris Messina. 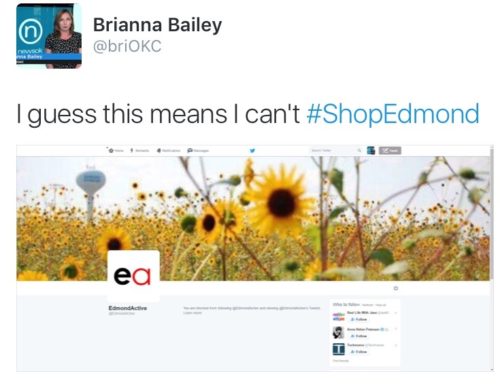 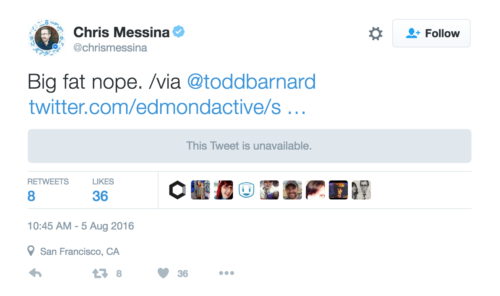 Our own Mike Koehler, CEO and Chief Strategist, discussed the issue with KFOR reporter Lorne Fultonberg on Friday afternoon.

So, how could things have gone differently?

In any misunderstanding or issue involving brands, the biggest factor to a successful resolution ultimately lies in the immediate response by the brand. Here are a few things to keep in mind when responding to a crisis on any scale through social media:

By allowing yourself a little bit of time to figure out the best response to whatever is happening, you automatically decrease the possibility of making the problem worse through hastily drafted responses. Allow yourself the time to have consistent, thought-out responses to defuse the situation.

Often times, having the right people in your corner can make the difference. Seeing a situation from multiple perspectives helps identify your blind spots for an overall better response. You may even need to consider having a marketing firm to consult with regularly to prevent and effectively respond to situations like these when they occur.

Own up to your shortcomings in the situation. If you said something you shouldn’t have, apologize wholeheartedly to those you upset and try to right the wrong. If there has been a misunderstanding, apologize for being unclear and reconsider your message. Understand where the outrage is coming from and address that concern directly. People are more graceful when you admit wrongdoing than trying to defend it further.

Once you figure out the right approach to resolving the issue, you want to respond to the problem as quickly as possible to try to get in front of the problem before it becomes overbearing in responses. Shaping your own messaging is important for being able to frame the issue correctly before someone else can write their version of your story for you.

For ongoing issues, see if there is another viable option to resolving the problem without going to social media about the concern. For #ShopEdmond specifically, we suggest reaching out to the few brands using the hashtag without advertising with the magazine. By approaching them directly, you have the opportunity to express your concern and possible establish a relationship that would lead to a partnership opportunity with those businesses as well. The entire Twitter backlash may have been avoided using this approach.

Ultimately, if you need help in a situation like this, know who to call. Oftentimes, there is a fine balance between dealing with crises effectively and making them worse. By having a plan in place for difficult times, you are able to learn to effectively handle issues when they inevitably rise for your business.