We Need to Talk About Facebook – Scrambling To Respond

Facebook is taking swift action to calm growing concerns from Congress and the public about the platform’s approach to privacy and data security. Its response to the Cambridge Analytica scandal and the resulting changes to the platform will have a profound impact on brands, developers and users moving forward.

On April 10, Facebook CEO Mark Zuckerberg went live at a joint hearing with the Senate Judiciary and Commerce committees and on April 11, he testified in front of the House Energy and Commerce Committee. Zuckerberg told Congress Facebook is taking proactive action to prevent incidents like this from happening in the future, but this announcement may be too little, too late. Whether change comes from platform inclination or through government regulation, this seismic shift will constrict and change the way advertisers can reach people online.

Facebook is working to roll out solutions quickly in response to the growing stories surrounding their company and data misuse.

Facebook Chief Technology Officer Mike Shroepfer wrote a blog post within the last week outlining several changes that are in the works on Facebook’s API to limit the volume of data app developers can collect from Facebook users. With the Events API, for example, apps will no longer be able to access attendees or posts on the event wall, and the Groups API will no longer provide member lists or names associated with posts or comments. Apps will no longer be able to see a user’s religious or political views, relationship status, education, work history, and tons more, all of which was previously readily available.

They announced plans to display all active advertisements on each brand’s page in response to the Russian interference scandal. This feature is currently only available to users in Canada but will roll out in the U.S. in the coming months.

In September, Facebook rolled out a feature called “Recent Ad Activity.” This feature allows users to see which brands they have connected with in the past, which ads you’ve clicked on as well as how the brand connected with you initially. Below is a screenshot of what it looks like from the user’s perspective. 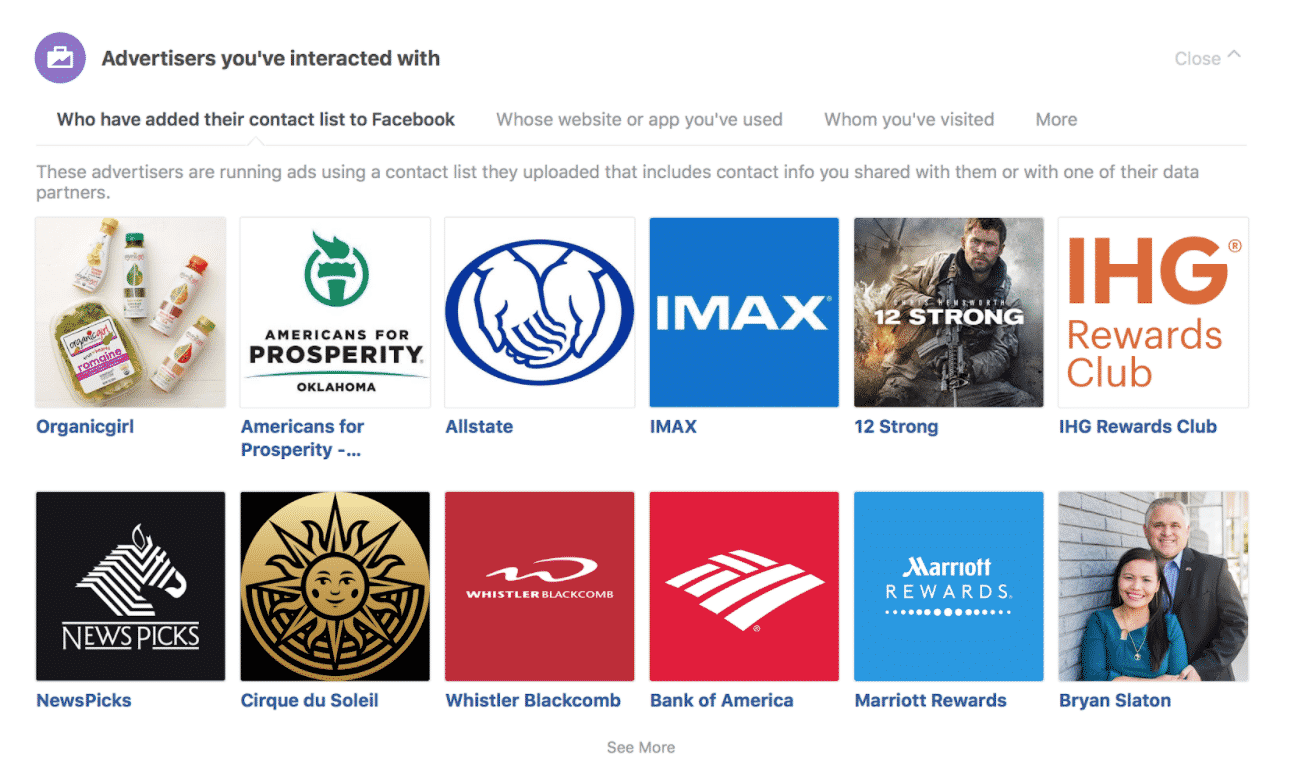 Facebook has also rolled out some redesigns to make it easier for users to see and adjust their privacy settings. Much of the discussion during Zuckerberg’s Congressional testimony had to do with what users could keep private and whether those settings were opt-in or opt-out.

On the platform’s mobile app, Facebook has tweaked its user experience. According to Time Magazine, “The company says the new layout will streamline the settings into one location “instead of having settings spread across nearly 20 different screens.”

Downloading your personal data has been the most interesting change so far. Facebook is letting users see just what it knows about them, but downloading all of their data settings. It’s made for some interesting discoveries and will continue to for users who may have been naive about what they let apps and Facebook know about them.

These new privacy-related features are just beginning as public pressure forces Facebook and other online platforms to prioritize privacy and data security more consequentially than ever before.

There needs to be a balance in which users feel safe and protected, but businesses still see potential in opportunities like they do now. Advertising transparency will be a vital component for companies on Facebook to retain their relationship with consumers. With change comes opportunity. With that in mind, advertisers will have to adapt to these changes and pivot their strategy on the platform.

Annie Strom is a strategist for Smirk New Media.

Editor’s Note: This is the third blog in a content series by Smirk New Media about the Facebook Cambridge Analytica scandal. Next in Smirk New Media’s We Need to Talk About Facebook series, a look at why the platform still works by Strategist Emily Martinez.