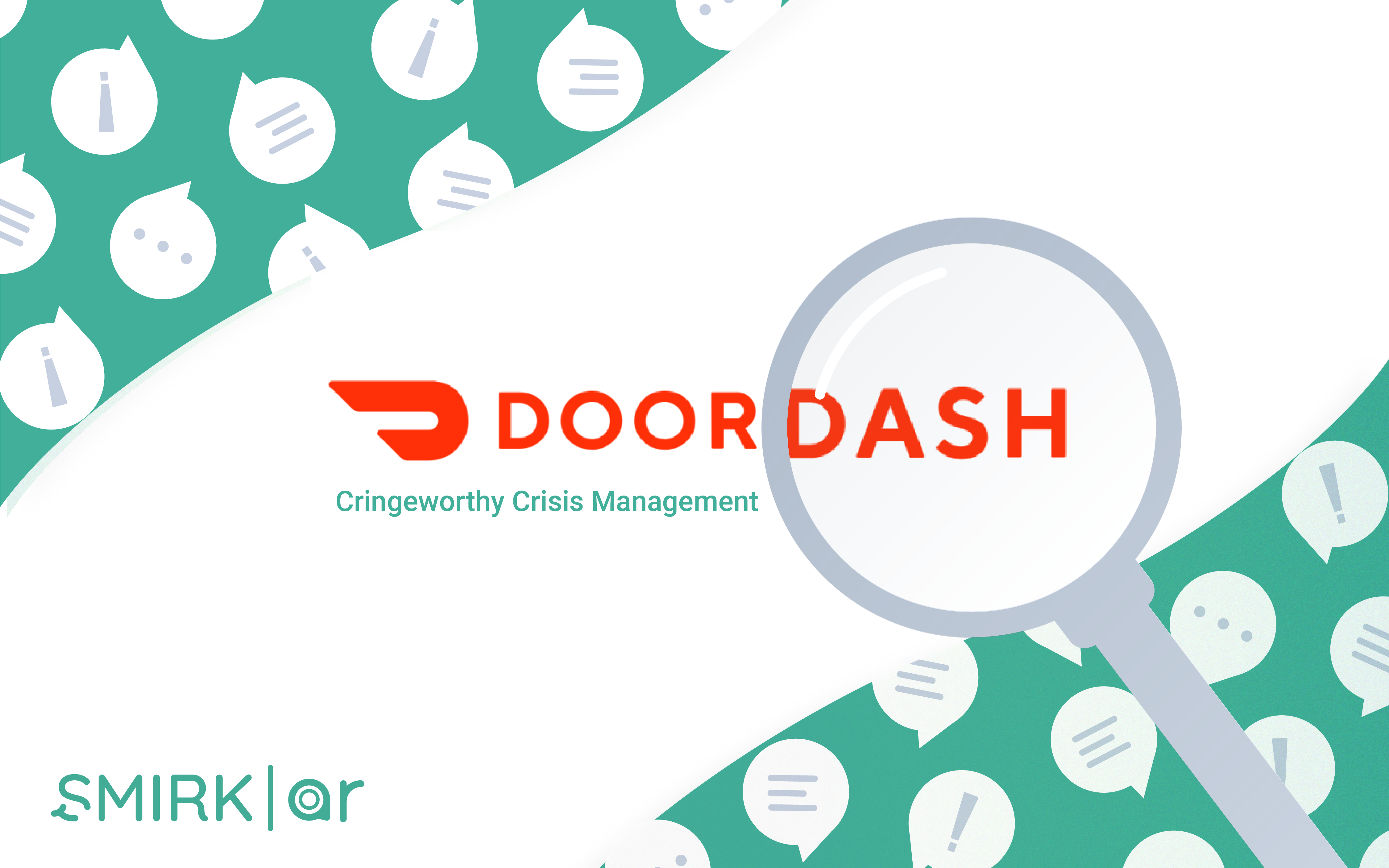 The story went viral in a matter of days. Frequent users of the delivery app, former Dashers, and vocal bystanders speaking out in solidarity flooded social media. After the story was first reported, DoorDash made empty promises about changing their tipping policy. Then, stayed oddly silent in the weeks following while “cancel culture” did its thing.

As an agency that specializes in online reputation management for national brands, Smirk followed the DoorDash story since it broke in July. Now that the situation has simmered down, here’s everything you need to know about this cringeworthy example of crisis communication.

“DoorDash offers a guaranteed minimum for each job. For my first order, the guarantee was $6.85 and the customer, a woman in Boerum Hill who answered the door in a colorful bathrobe, tipped $3 via the app. But I still received only $6.85.

Here’s how it works: If the woman in the bathrobe had tipped zero, DoorDash would have paid me the whole $6.85. Because she tipped $3, DoorDash kicked in only $3.85. She was saving DoorDash $3, not tipping me.” 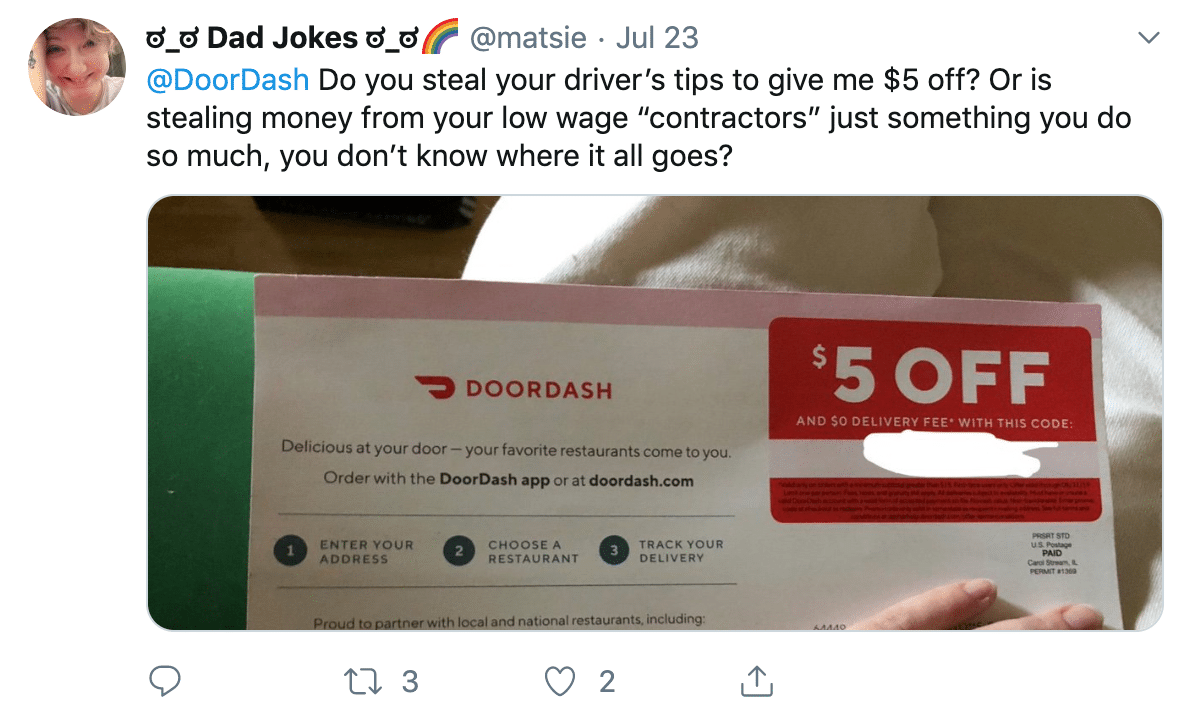 How Did DoorDash Respond?

To say that DoorDash didn’t handle the criticism well is a painful understatement — unless you consider ignoring nearly every tweet calling for accountability handling it well (we don’t).

This radio silence was a surprising strategy for a brand with its own Twitter account for customer service and a reputation for publicly handling customer issues within an hour or two of being mentioned.

Rather than replying to these tweets directly, the brand’s CEO Tony Xu laid out an explanation of their current pricing model and a promise to change shortly after the NYT story caught fire.

Where They Went Wrong

Xu’s promise would prove to be empty. DoorDash’s earning structure did not change, and people noticed. Once again, the brand turned a blind eye to the pleas for fair payment with minimal responses to their tagged mentions.

A Possible Patch Up

We thought we were doing the right thing for Dashers by making them whole if a customer left no tip, but the feedback we’ve received recently made clear that some of our customers who were leaving tips felt like their tips didn’t matter. We realized that we couldn’t continue to do right by Dashers if some customers felt we weren’t also doing right by them. To ensure that all of our users have a great experience on DoorDash, we needed to strike a better balance.

It’s easy to imagine the thought process behind Xu’s initial series of tweets and his recent Medium article — he recognized the issue, explained the brand’s intentions, and vowed to change based on the public response they had received. But, the absence of any direct communication or reputation damage control makes this feel like Xu is having a conversation with himself (and then patting himself on the back).

By failing to respond to individual tweets during the viral period and avoiding any opportunity to apologize, DoorDash has made its priorities clear: they’ll listen to your feedback, but they won’t make you feel heard.

Empathy goes a long way in both reputation management and brand loyalty, a trait that was missing from DoorDash’s approach to this blatant PR crisis. You may be thinking, “Why is empathy important?” or “Why does it matter that they didn’t answer anyone?”.

It’s imperative that your crisis management plan is built with both transparency and empathy, no matter the size of the issue or the size of your brand.

After DoorDash’s tipping and payment policies went viral, no statements were made and the brand chose not to engage with the comments they received for two days.

Now, two days is a long time on the internet. It’s more than enough time for people to assume the worst — DoorDash will not change, Dashers aren’t receiving fair wages, and DoorDash doesn’t care about anyone’s concerns.

What We Can Learn from DoorDash

Whether it’s a single tweet about a fly in someone’s burger or a security breach in your app, you must lead with recognition, understanding, and a commitment to resolution. Sticking your head in the sand will never make an issue go away, and could ultimately be detrimental to your brand.

Your online reputation follows you offline, and not taking responsibility in bad reviews has a direct impact on your bottom line. We’ve seen businesses of all sizes lose significant foot traffic and sales after they’ve been dogpiled online and chosen not to engage.

Why would you trust or support a company that seems to have no interest in resolving its patrons’ issues? 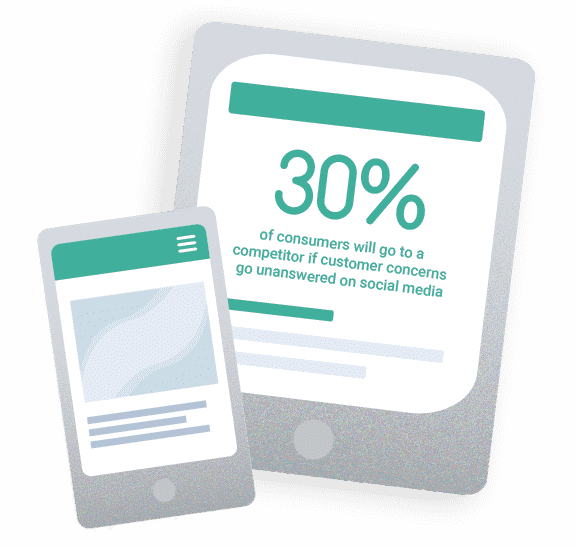 A commitment to empathetic, human-led brand reputation management is what led us to launch Smirk’s Active Response system with customer-facing brands in 2017.

The System for Successful Crisis Management

Active Response is our six-step system for tackling every aspect of a company’s online presence, including:

Active Response is adaptable to your brand and scalable to the volume of comments and reviews you’re receiving online. Our clients range from franchise owners with more than 5 locations to corporations with thousands of locations across the U.S.

Interested in learning more about Active Response? Schedule a consultation with the Smirk team for insights into your online customer service and crisis plan. 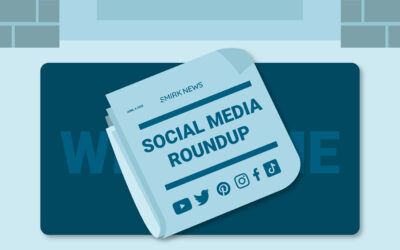 Platform changes are heating up as we head into summer. Our monthly series continues as we showcase May’s top social updates. Missed Opportunities It's essential not to just focus on organic content when developing your wider social media strategy. Paid digital... 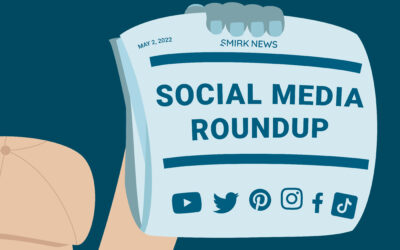 April showers bring May flowers… and new changes to your favorite social media sites. Continuing our monthly round-up series, here are April's biggest platform updates. Response Time Matters Managing your online presence is so much more than just making sure your...